Supermarkets Under Pressure To Do MORE. Canned Tuna Startup Is Changing The Industry. Preserving Ocean Sea Life While Delivering Never Before Seen Quality. 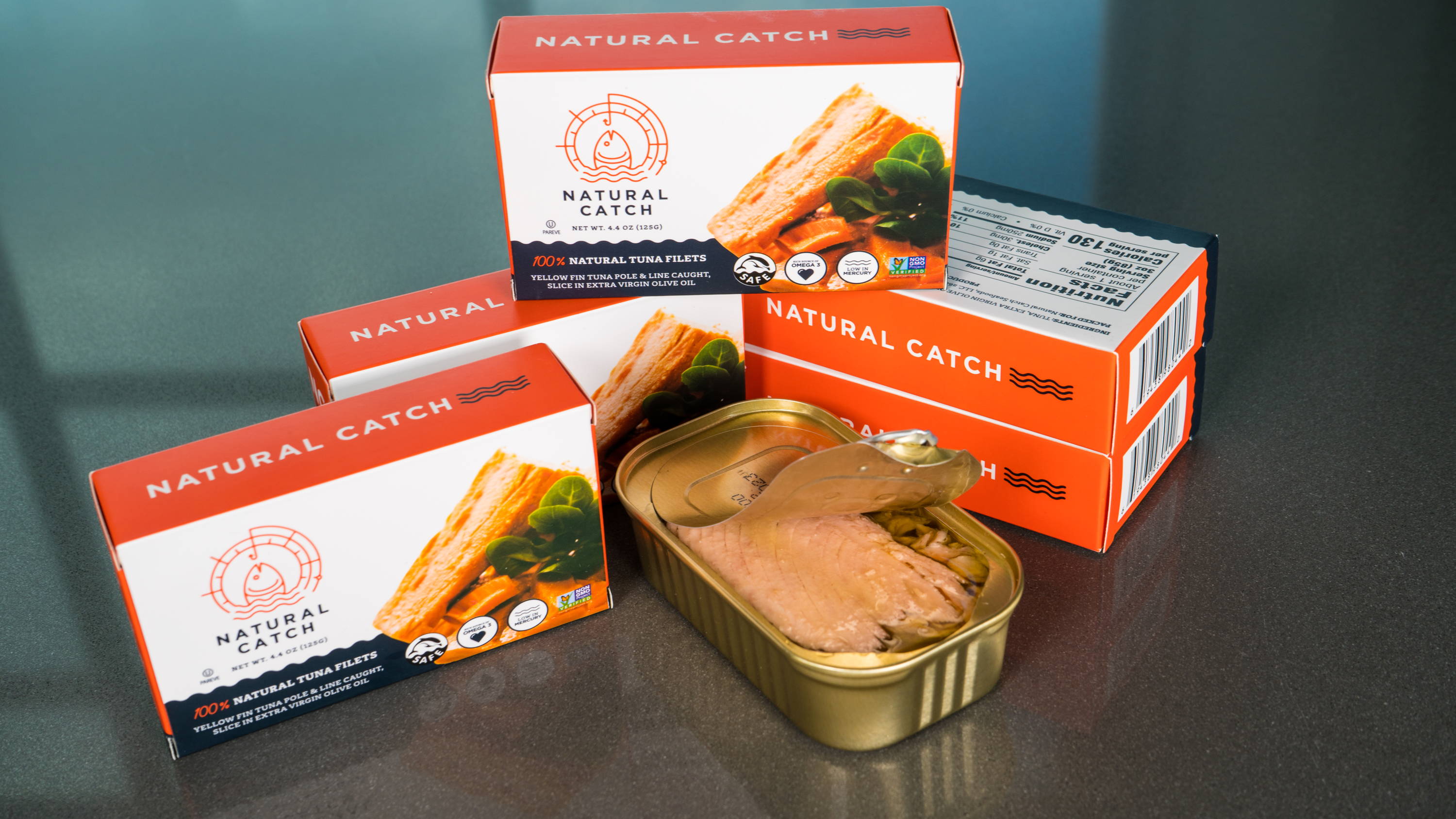 A major issue with todays fish industry is the use of nets. Almost the entire canned Tuna market in the United States is caught with massive nets that kill animals. These nets destroy our oceans and these billion dollar corporations who have been in the supermarkets for decades refuse to stop. They destroy our oceans by picking up anything and everything on the ocean floor for miles and miles, despite only trying to catch one certain species. This is called Bycatch (or by-catch) which is a fish or other marine species that is caught unintentionally while catching certain target species and target sizes of fish. The use of large nets creates a mayhem of unintentional bycatch of wildlife that consists of dolphins, turtles, sharks, whales and many others. By the time they go to release the bycatch back into the ocean it's usually too late and precious Dolphins have their lives taken away by inconsiderate corporations who only care about the money.

A new brand of Canned Tuna has emerged and is already forcing change on the industry. Exploding in popularity for their activist stance on the oceans and use of traditional fishing methods to globally source all of their Premium Canned Tuna from the Pacific Ocean. Every can of Natural Catch is sourced by Pole & Line Fishing which is a method used to catch tuna one at a time. Pole & Line Fishing helps eliminate unintentional bycatch of other wildlife species such as Dolphins, Sharks and Turtles. NO NETS ARE USED OR ALLOWED. Pole & Line caught Tuna is much more expensive than any other method since it is all caught one at a time but also produces a much higher quality catch. Natural Catch does not care if it's more expensive to use these methods and does not increase the price on the consumer, instead they eat the cost to compete with the titan sized corporations which are too big to fail. The goal of Natural Catch is to force the billion dollar supermarket brands to use Pole & Line fishing by raising awareness and producing an unbelievably high quality can of tuna the U.S.A. market has never seen before. It's time these supermarket brands stop cutting corners, killing wildlife and stop selling low quality fish to Americans.

After seeing hundreds of 5 STAR REVIEWS on Natural Catch's Facebook Advertisements, I decided to buy a 12 pack of Natural Catch from their website. 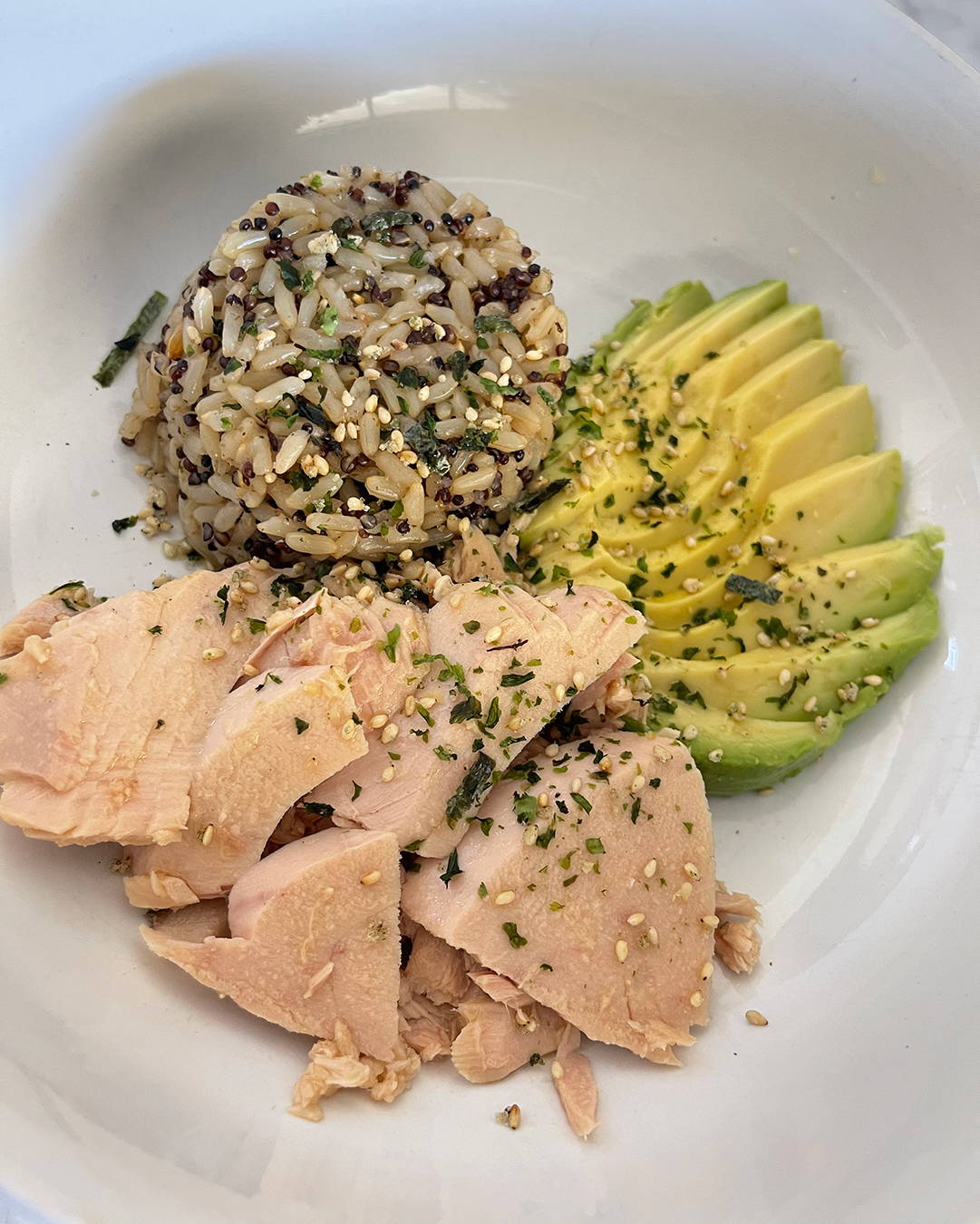 Natural Catch REVIEW: Quality UNMATCHED, From the Moment You Open a Can

We received our 12 pack of Natural Catch Tuna Yellowfin Filets to do an in depth review. They offered Free Shipping via USPS 2-3 Day Priority and I received it in 2 days. The packaging is superb, we have never seen Tuna packaging look like this. We were so impressed with the packaging but we were not prepared for what we were about to find. From the very moment we opened the can we saw a presentation that we have never seen before, there were hand cut "Tuna Filets" prepared beautifully in the can. For the first time ever I had opened up a can of tuna and enjoyed what I saw. Not only did I enjoy what I saw but I enjoyed what I smelled. The first thing I said was "WOW" and the second was "THIS DOESN'T SMELL FISHY AT ALL". I was going to make a Tuna Sandwich with this initial test but immediately stopped and said let's try this Yellowfin Tuna straight out of the can. The taste was absolutely divine, this really was Canned Tuna I have never seen or tasted before. The thickness reminded me of chicken but flaked off beautifully like perfectly cooked ribs. It was not too fishy tasting or smelly at all but I could still taste the Tuna. It aligned perfectly in the middle and I was eating it STRAIGHT OUT OF THE CAN! The fish was not dry at all and had perfect moisture. This is most likely from the extra virgin olive oil they import from Spain to marinate the hand cut filets in each can.

This is by far the best can of Tuna I have ever had in my entire life. I thought I was a fan of Albacore Tuna but instead I am now a Natural Catch Yellowfin fan. I can tell Natural Catch does not cut corners and the experience alone was well worth it. I now believe the hype from all the 5 star reviews and comments I saw on their Facebook page and advertisements. 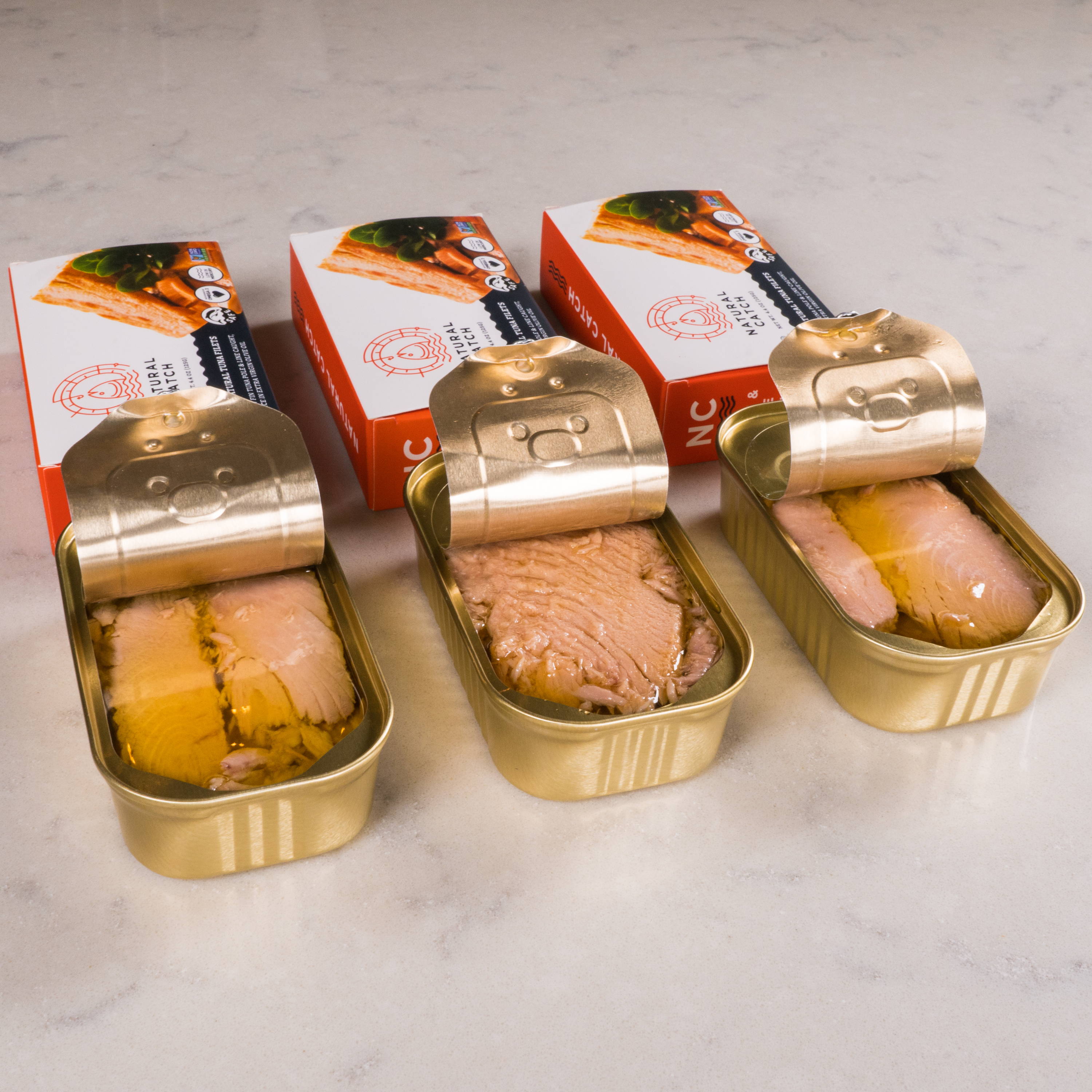 What got me to investigate Natural Catch and their purpose was their post I saw on Facebook. There were literally hundreds and hundreds of positive comments and reviews on each post. These were Americans going crazy over a can of tuna on Facebook. It sounds ridiculous but what's even more ridiculous is the quality of Natural Catch Tuna. I pulled these reviews from the very top of only 1 post of theirs, this post has over 1000 comments and I could not find 1 bad honest review. 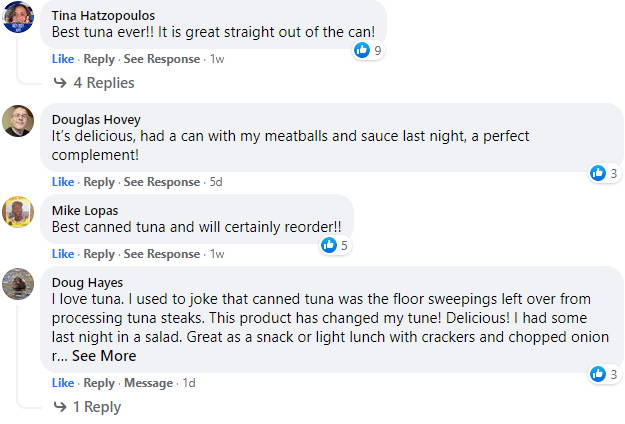 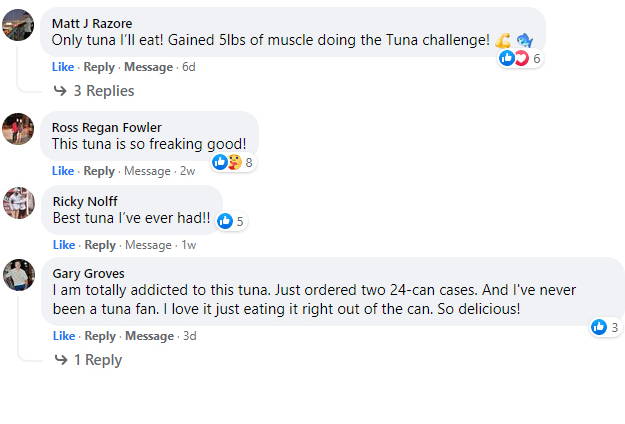 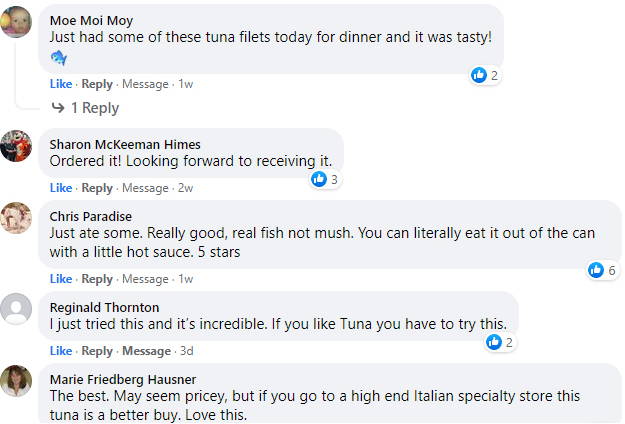 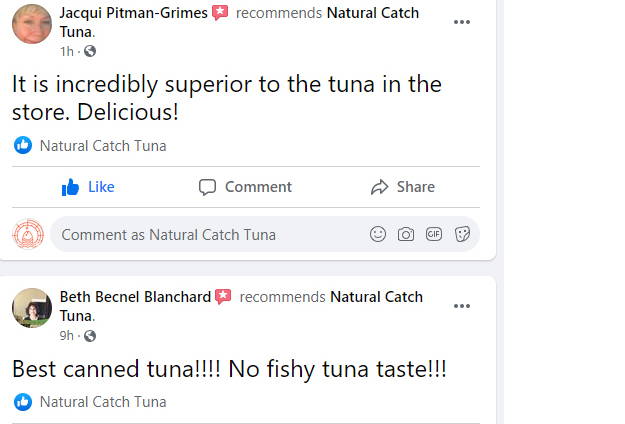 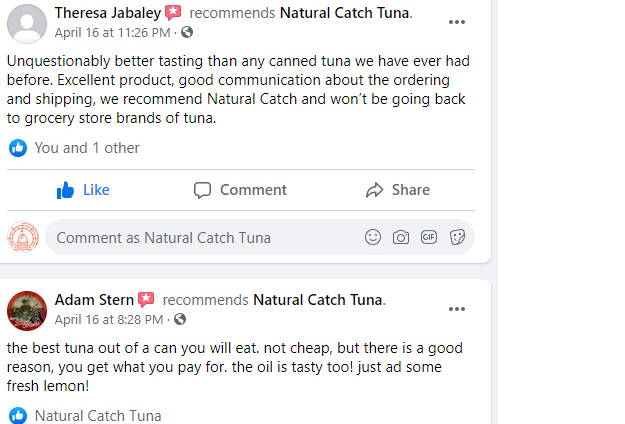 Are you ready to upgrade to high quality canned Tuna while making a splash in the fishing industry forcing the change from Big Nets to Pole & Line fishing? Our readers enjoy an exclusive 40% OFF the 12 pack and 49% OFF the 24 pack with Free Shipping on any order by clicking the button below! Thank you for considering making a change for our oceans while enjoying quality canned tuna the market has never seen before.